‘They Stole That Election From Me,’ Rudy Giuliani Said Decades Ago 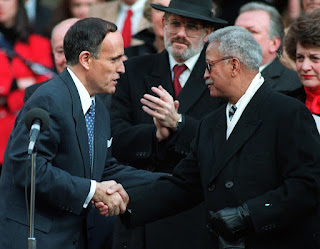 'They Stole That Election From Me,' Rudy Giuliani Said Decades Ago

I remember being at the hotel on election night in 1993 where Mayor David Dinkins and his supporters had gathered to celebrate what they hoped would be his re-election. I was a reporter for The Village Voice, and the polls had been close.

But it was not to be. At a certain point in the evening, the local cable news network NY1 (just about a year old at the time) called the race for Rudy Giuliani. Shortly after, some members of the mayor’s entourage thundered past me.

In the mayhem, I managed to make eye contact with Lee Jones, the mayor’s press secretary, whom I had known since he worked for Mayor Ed Koch (Mr. Dinkins kept him on). I could see he was distraught. “Well,” he said, “by and large, the coalition held. The coalition held.”

That may sound like spin, but it wasn’t. We knew each other quite well. I took it that he was just trying to think of something hopeful to say — and in retrospect, he wasn’t wrong.

As I’ve thought back on those years in the wake of Mr. Dinkins’s passing last week, I’m floored at the extent to which the politics of New York City foreshadowed the national politics of today. If the American polity consists of two warring camps right now, we might say that the New York of that time helped blaze that unhappy trail.

Both men’s coalitions were remarkably sturdy. Even with a series of tumultuous situations — like the AIDS, heroin and crack cocaine epidemics, and dark economic times that forced Mr. Dinkins to enact severe budget cuts — two relatively marginal factors seemed to tip the election. First, Mr. Dinkins lost a few thousand mostly white voters over his too-tentative handling of a riot in the Brooklyn neighborhood Crown Heights and the boycott of two Korean-owned grocery stores by Black residents. Second, Mr. Giuliani benefited from a Staten Island secession referendum that Republicans had led the way to getting on the ballot. It goosed turnout in that borough, which benefited Mr. Giuliani (Republicans knew how to put a finger on the electoral scale even then).

Mr. Dinkins’s coalition was liberal, multiracial and multiethnic. It arose and came together over the course of the 1970s and 1980s. For decades before him, New York City politics had been dominated by “the three I’s”: Italy, Ireland and Israel. For three citywide offices — mayor, comptroller and City Council president — it was often the case that one would go to an Italian, one to an Irishman (or by the 1970s, Irishwoman) and one to a Jew.

In that arrangement, Black people and Latinos were junior partners, and they could not win the mayoralty because they could never coalesce around a single candidate. Meanwhile, the 1980s were happening: raging inequality and the AIDS crisis; a wave of crime and homelessness; the decade of the rise of the hedge-fund titans and Manhattan real estate celebrities (including you-know-who). In addition, Mr. Koch played increasingly to white racial backlash as the years went on. The Dinkins coalition — Black people, Latinos, gays, liberal Jews, immigrants, assorted others — was an emerging New York that was mostly not invited to the conspicuous prosperity of the ’80s enjoyed by Wall Street financiers and real estate developers. Mr. Dinkins’s most historically significant accomplishment was arguably not anything he did as mayor; it was to have assembled this coalition and, with his widely admired strategist Bill Lynch, proved to the world that it could win.

The Giuliani coalition was the traditional and aging New York of wealthy Manhattan elites and white ethnic populations in other boroughs — the police and firefighters, the owners of the hardware and liquor stores in Howard Beach and Bensonhurst (the “red” parts of New York City), the pressmen at the Daily News plant, the sons and daughters of the men and women who had worked at the Brooklyn Navy Yard during the war.

They were white. As such, they were privileged, even if it often didn’t feel that way to them. By and large they did not like the changes, like letting Black and Latino people into their unions and neighborhoods, that the emerging New York was seeking to impose on them. In Mr. Giuliani, they found their avenger.

Fundamentally, those two coalitions in our largest city are now our two coalitions in the United States. And just as those two mayoral elections were close, hard-fought referendums on which New York would have power, our recent national elections have followed exactly the same pattern. Emerging America won in 2008 and 2012. Backlash prevailed narrowly in 2016. Then, a few thousand votes switched, and multiracial America won again.

In some ways, I feel like I’ve been watching the same movie for 30 years. It even has some of the same stars, saying some of the same kinds of things. Of that 1989 election, Mr. Giuliani once told the journalist Jack Newfield: “They stole that election from me. They stole votes in the Black parts of Brooklyn, and in Washington Heights.”

Mr. Dinkins, though a good and decent man, in the end didn’t have the political vision and will to transcend the divisions. Mr. Giuliani, like his friend President Trump, didn’t have them, either (in his case, more by choice).

But these days I wonder who can transcend them. I know Joe Biden wants to, but I sure don’t get the feeling the other side wants to play along. Lee Jones was righter than he knew, not just about 1993 but also about what’s unfolded ever since: The two coalitions have not only held; they’ve metastasized. I may be watching this movie the rest of my life.

Michael Tomasky (@mtomasky) is a columnist for The Daily Beast, editor of Democracy: A Journal of Ideas and a contributing opinion writer, and the author, most recently, of "If We Can Keep It: How the Republic Collapsed and How It Might Be Saved."