At New York’s Nadir, Dinkins Gave the City the ‘Freedom to Imagine’ 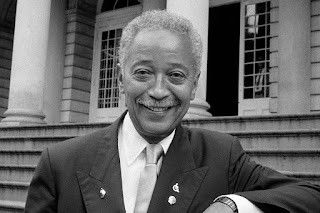 At New York’s Nadir, Dinkins Gave the City the ‘Freedom to Imagine’

An assessment of the former mayor, who died on Monday, reveals how he nourished innovation and laid founding stones for a modern city.

There is human tendency to hold the departed in tender regard. But as this is New York City, and as our mayors are like that tenant down the hall whose habits can get on your nerves, our take on a departed Hizzoner can be unsparing.

When the former Mayor David N. Dinkins died on Monday at 93, assessments recalled the Crown Heights riots, which he mishandled, and the most grinding recession since the 1930s, and homicides reaching a record high. That reckoned, however, without his successes, the ways in which his administration nourished innovation and laid founding stones for our modern city.

This past weekend, I rode my bicycle through the Bradhurst neighborhood of North Harlem. I had walked those streets in 1988 and felt swelling dread. Old prewar apartment buildings stood vacant then, doors and windows broken like blackened eyes. Kilo bags of heroin sat on car seats and gaunt crack addicts muttered and stared and spit. As for Jackie Robinson Park, carved out of a gray stone ridge?

It was a ghostly sight.

This is what I found this past weekend: Handsome rehabilitated buildings cheek to jowl with handsome new buildings, restaurants and West African small stores, and working-class Black parents pushing strollers where smack deals once went down.

In the early 1990s, in the depths of recession, Mr. Dinkins, the city’s first Black mayor and a resident of Harlem, decided that what had become of Bradhurst could not stand. His administration — staffed with the best low-income housing finance people in the nation — poured vast sums into Bradhurst, and working with local churches and nonprofit groups, restored a dead neighborhood to life.

The city put a supermarket on 125th Street in Harlem at a time when to talk of that ambition was seen as a pipe dream. Today, 125th Street is the spine of Harlem’s economy.

Mr. Dinkins rebuilt more low-income housing and neighborhoods across the city in a single term than Rudy Giuliani did in two terms while riding far better economic winds.

To draw the measure of Mr. Dinkins’s legacy is a tricky task. He had a near-impossibly tough job, and perhaps he was not exactly the right man for it. He had to face the three horsemen of the urban apocalypse: soaring AIDS infection rates, a crack-fueled crime wave and homelessness.

There were victories, which I covered from the cramped City Hall press quarters known as Room 9. His administration joined forces with Gov. Mario M. Cuomo and sluiced money into assisted housing for the mentally ill. This established a national model, and the shelter population fell to its lowest point in the last 30 years. The shelter population in 1991 stood at less than 20,000; today it stands at roughly 57,000.

The former mayor, whose commitment to fighting poverty was bred in his bone, is perhaps best known for working with Governor Cuomo to persuade the Legislature to dedicate a tax to hire thousands of police officers at a time when more than five New Yorkers were getting murdered every day. (Although Mr. Dinkins often was blamed, the city’s homicide count was of long standing, as murder and mayhem cut a bloody path across the 1980s. He came to office in 1990.)

He did not leave it at more police officers, however. He persuaded his political partners to preserve a substantial portion of the anti-crime money to keep public schools open late into the evening, which kept tens of thousands of teenagers off the street. Cities across the country paid New York the compliment of copying that initiative, too.

In the mayor’s final year, homicide numbers took the greatest six-month tumble in city history. The number of those in city jails began a precipitous decline.

“David gave us the freedom to imagine what neighborhoods could be,” said Harvey Robins, who ran the Mayor’s Office of Operations and was a de facto grand master of innovation. “We kept schools open at night, health clinics on weekends and we got every library in the city to six days a week.”

This is not to suggest that Mr. Dinkins was a mayor for the ages. He could be courtly and confounding in equal measure, his Edwardian cadences failing to give eloquent voice to the annoyance and frustration that bubbled beneath. More than once, he faced down young Black activists who expected a more radical man than this liberal-minded former city clerk and son of the Harlem Machine.

His hand rested light on the managerial tiller. Some days, his City Hall resembled a ship narrowly avoiding the shoals. It is difficult to overstate the depth of the problems he confronted. It was the city’s worst secular decline in a half a century, with hundreds of thousands of jobs lost and plummeting revenues. One week he handed out union raises and announced layoffs days later. He raised taxes and cut services.

But his administration was strikingly more transparent than those that followed and more willing to acknowledge failures. By comparison to the current mayoral administration, when innovation is defined as pushing labor costs a year into the future, Mr. Dinkins’s contracts contained productivity savings and established benchmarks to trace innovation.

“When crime is high and there’s no money rolling in, there’s a lot of ferment and innovation,” said Michael Jacobson, who was a budget official and probation commissioner in the Dinkins era and is now director of the CUNY Institute for State and Local Governance. “And we had support at City Hall.”

Mr. Dinkins negotiated a stadium deal that still draws applause. His administration gave the United States Tennis Association a 99-year lease on city parkland; in exchange, the tennis association built a stadium and tennis complex in Flushing Meadows, Queens, and shares the courts with the public.

The tennis deal, the former Mayor Michael R. Bloomberg proclaimed more than a decade ago, was “the only good athletic sports stadium deal, not just in New York but in the country.”

His officials played a key role in negotiating the revitalization of Times Square, persuading the Walt Disney Corporation to rehabilitate a 42nd Street theater.

Again, none of this is to suggest Mr. Dinkins was faultless. He failed to face down a Black nationalist boycott of a Korean vegetable stand, a confrontation encoded with racist language. The Crown Heights riots were communal, Black and West Indian youth raging at a Hasidic Jewish community. There were just two deaths — arguably neither was avoidable — but the city officials were too passive in restoring order.

A damning state report on those riots appeared in the summer of 1993, just as Mr. Dinkins faced another challenge from Mr. Giuliani. I was writing an assessment of his term and he summoned me to his basement office in City Hall.

For two hours, he talked with passion of the homeless and libraries, and of rebuilding that neighborhood in northern Harlem. It was midafternoon, and the sun poured through the windows to his office. It was clear the national and city economy was turning around.

I have been mayor in a hurricane, he told me. “I’d really like to be here when the roof is rebuilt,” he said. “There’s so much we could do.”

Hizzoner never had that privilege. Four months later he lost a close race and stepped into history.