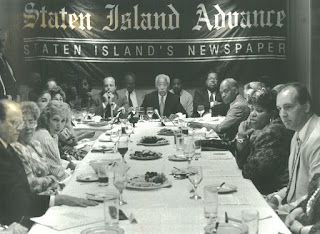 Jimmy Oddo remembers the day well. July 27, 1992. It was brutally hot. The borough president was chief of staff for then-Councilman John Fusco.

In those days, the mayor moved the City Hall operation to each borough for a week to bring New York’s massive government and its commissioners closer to the people. And for him to get to know the community better.

Gathered on the steps of Borough Hall with Jim Oddo was Guy, daughter Susan, other elected officials, and a group of schoolchildren, to “welcome” the mayor, a man who received just 18% of Staten Island’s vote a couple of years earlier. Not exactly a mandate.

Secession fever was high, and the Fresh Kills landfill was Enemy No. 1.

Guy – never one to hold a punch – decided to present Mayor Dinkins with a key. Not a key to the borough. A key to the Landfill.

To know David Dinkins was to know he did not take kindly to that kind of public affront.

But the man had class.

“The day he was presented the key was oppressively hot,” Jim remembers. “One of the little school students passed out. I remember how genuinely concerned the mayor was when he approached the kid.

“That look on his face wasn’t a BS politician looking for a good picture.”

Ever gracious – at least in public – at day’s end, the mayor had this to say: ``Staten Island is a beautiful borough. I’m enjoying it. I’m well-received everywhere I go. I’ve got no complaints.’'

Despite the fact that he now held the first-ever “Key to the Staten Island Dump.”

The news of his passing caused hardly a ripple on COVID-weary Staten Island. Many of you might be too young to remember Dave Dinkins. Many who do might have viewed the man with disdain.

But our communities of color noticed.

“I just wonder if you are doing a look back,” asked activist and community volunteer Belinda Dixon. “The mayor and his wife were like family to me . . . like a favorite uncle.”

Belinda recalled fondly her days volunteering for Dinkins and her work as secretary to the Civilian Complaint Review Board. She remembers when Mayor Dinkins brought the first Black Mayor’s Conference to New York. How she played tour guide for mayors from Mississippi, Michigan and Alabama.

She talked about the “Increase the Peace Corps,” a Dinkins initiative to teach volunteers about cultural differences in the aftermath of Brooklyn’s Crown Heights riots -- a tragedy he was blamed for for not quelling unrest after a car driven by a Hasidic Jew struck and killed a 7-year-old Black child. In retaliation, a young rabbinical student was stabbed to death hours later.

Indeed, David Dinkins’ mayoralty was riddled with controversy and problems. And history is judging him as a weak manager and lackluster compared to his successor, Rudy Giuliani.

But David Dinkins had heart and passion to create a better city for all New Yorkers. Somehow, because the mayor was Black, many thought he could heal its racial divide.

Three decades later and we’ve learned that’s not a job for just one man or woman.

Crown Heights was a single incident but laid bare the racial strife in New York, something certainly not born with the Dinkins’ mayoralty. Critics rarely discuss the New York he inherited from Ed Koch. A city in a deep recession. The crack epidemic scourge. AIDS cases increasing. A murder rate soaring to at least five a day. The homeless population on the rise.

No matter how Staten Island’s week in the spotlight ended, and no matter how Mayor Dinkins portrayed it – “Whatever your feelings about city performance so far, I think any fair and reasonable Staten Islander is now realizing that the care is there” – the mayor knew he had problems here.

As my colleague Tom Wrobleski recently pointed out, “Dinkins also wanted to put homeless shelters here and across the city. He had trouble finding money to maintain Staten Island Ferry service levels. He suggested that New Jersey’s chemical plants where a bigger health threat to us than the Landfill. Dinkins knew he didn’t need our votes to win, and it showed.”

Staten Island wanted out of the city. Dinkins showed no empathy.

“I am six months into my first real job,” BP Oddo remembered. “Kid from Old Town Road. And I’m sitting in a van with the mayor of the City of New York taking a tour of the Fresh Kills Landfill.

“I remember someone raising secession to Mayor Dinkins and without turning around he said, “Y’all aren’t going anywhere.”

In his campaign for a second term, Mayor Dinkins visited Staten Island only twice. The first was a Saturday night and he was so late in arriving we couldn’t even get one deadline photo in the next day’s Sunday Advance.

Rudy rode a wave as New York turned itself around after Dinkins, but what Rudy supporters don’t know – or won’t admit: David Dinkins was behind at least some of it.

Michael Powell of The New York Times remembered the mayor working with Mario Cuomo to use a tax to hire thousands more police officers.

He kept public schools open late into the night, “which kept tens of thousands of teenagers off the street.”

As Rudy took the oath of office on New Year’s Day 1994, the murder rate was already dropping.

“He oversaw the reopening of the New Victory Theater with the creation of the new 42nd Street and most importantly he signed the deal to get Disney to come and renovate the New Amsterdam Theater, which literally had holes in its roof, mushrooms growing inside,” Tim Tompkins, president of the Times Square Alliance, told NY1.

What brings this all to mind is civility. Or the lack of it we see in today’s world of politics.

No, David Dinkins was not the best friend Staten Island ever had. He didn’t close a landfill, build a ballpark or open new schools.

As Fred Cerullo, the former South Shore Republican councilman during the Dinkins years, recalls, “It wasn’t always easy getting things done. The relationship between the Dinkins administration and Staten Island was always rocky. But the mayor was – always was -- a gentleman and sincerely cared about everyone . . . He really was a class act and his calm, peaceful manner will be missed . . .”

That calmness and desire to help everyone, combined with years of political savvy, began to calm a city in the throes of racial unrest and criminal mayhem.

Charming and gentlemanly are probably not reasons to elect someone. But neither are the savage pit bull attacks we see today.

David Dinkins retired from political life but not from public life. He taught at Columbia, showed up at civic gatherings, cocktail parties and took on the role of elder NYC statesman, giving advice when asked.

Retired Councilman and Judge John Fusco – a staunch Republican -- recalls his first brush with the mayor. “I appeared before Mayor Dinkins in the early 1970s when he was conducting hearings for the Board of Elections and I was law chairman of the local Republican Party,” John remembers.

“Always a gentleman. In 1992, he and Mrs. Dinkins invited members of the City Council Republican delegation and their spouses to Gracie Mansion for dinner. They were both warm, hospitable and entertaining.

“Our political beliefs differed but our friendship was beyond the political arena. May he rest in peace.”

We can hope those in today’s political arena take note. Because that, neighbors, is the way it should be.