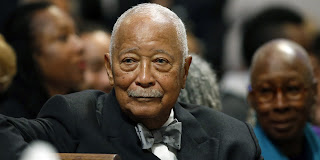 Dinkins "knew how to fight without picking up a gun. His words were his bullets and we must learn from that today," said New York Assemblywoman Inez Dickens.

New York City officials and community members gathered Saturday morning in Harlem to pay tribute and celebrate the legacy of David Dinkins, the city's first Black mayor, who died this week at age 93.

"We did not think that the Harlem community and those around it should live the weekend without showing love, affection and admiration for a man who changed the course of history," said Rev. Al Sharpton, president of The National Action Network, one of the nation's leading civil rights organizations, which hosted the event.

Dinkins was elected mayor in 1989 after two high-profile racially charged cases took place under the previous administration of Mayor Ed Koch: the death and rape of a white jogger in Central Park and the bias murder of a Black teenager in Bensonhurst. He then lost his re-election to Rudy Giuliani in 1993.

"There's a generation of people who believed they could make a difference because they saw David Dinkins do it first. He has a human legacy. You can feel right here in this room," said Mayor Bill de Blasio, who worked in Dinkins’ administration and attended the event with New York City's first lady Chirlane McCray.

Early during Dinkins' administration newly freed Nelson Mandela made New York City his first stop in the U.S. in 1990. Dinkins had been a longtime, outspoken critic of apartheid in South Africa.

Former Congressman Charles Rangel, who was part of the influential African-American political coalition from Harlem known as the "Gang of Four" alongside Dinkins, attended the tribute Saturday and said that one of Dinkins' "greatest sense of pride is when he was able to convince Nelson Mandela to come to Harlem."

De Blasio said "they helped Nelson Mandela to the presidency of South Africa. They treated him like the head of state he was meant to be."

"This city by honoring Nelson Mandela changed the world," he added.

McCray, who also worked under Dinkins as a part of the Commission on Human Rights and a speechwriter, said that while her "heart is heavy because he's no longer with us, I can't help but also feel tremendous joy to have known him."

"He found joy in the work that he did," said McCray. "That joy generated, energy and enthusiasm, fighting for safe streets, new community centers, keeping our public libraries open six days a week for Beacon schools, for our children."

Dinkins poured a vast amount of resources into Bradhurst, a 40-square-block neighborhood in north Harlem, and worked with local churches and nonprofits to revive the decaying neighborhood. He also helped put a supermarket on Harlem's 125th Street at a time when revitalizing the region seemed like an unattainable dream. That street is now the spine of Harlem’s economy.

"David Dinkins was a fist fight for what was right," said Sharpton.

During his single term as mayor, Dinkins rebuilt more low-income housing and neighborhoods across the city than his successor Giuliani did in two terms while the economy was in better shape, the New York Times reported. His administration also helped provide assisted housing for the mentally ill, in collaboration with then-governor Mario Cuomo, effectively establishing a model that would be adopted nationally. The shelter population fell to its lowest point in the last 30 years under his term.

"He was faced in his first and only term with multiple crises that this city had not seen in years," including an an all-time high homicide rate, stubborn unemployment and his mishandling of a riot in Brooklyn, said New York Assemblymember Inez Dickens during the event, adding that Dinkins faced those crises as "a warrior who knew how to fight without picking up a gun."

"His words were his bullets and we must learn from that today," she said.