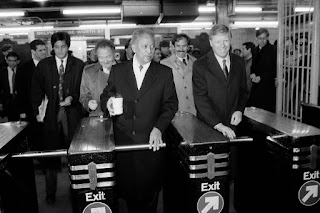 The former mayor was remembered as a mentor who inspired Black leaders to run for office and began to bring down the crime rate.

David N. Dinkins served a single four-year term as New York City’s first and only Black mayor. His tenure has been judged harshly at times, but it was also filled with accomplishments.

Mr. Dinkins, who died on Monday, had a significant influence on the city, shaping its physical infrastructure and beginning criminal justice initiatives that started to reduce crime.

He was remembered as a somewhat reluctant trailblazer and a gentleman who led the city during a difficult period of fiscal crisis and racial tension — themes that the city and the nation are currently grappling with once again.

Here is a look at some of his accomplishments:

A mentor who inspired others to run for office

Mr. Dinkins helped inspire a generation of Black leaders to run for office, including Laurie Cumbo, the majority leader of the New York City Council.

“His campaign inspired and ushered in the new wave of Black elected leaders, which then opened up opportunities for all people to know that they can also lead,” she said.

Carl Heastie, the speaker of the New York State Assembly, said Mr. Dinkins “was an example that although you may be the first, you must push open the doors for those who will come after you.”

Mr. Dinkins was a mentor to Mr. de Blasio, a Democrat in his second term who said Mr. Dinkins deserved credit for his marriage. He met his wife, Chirlane McCray, while both were serving in the Dinkins administration.

“He was my mentor, he was my friend, and his steadfast commitment to fight for that ‘gorgeous mosaic’ inspires me every single day,” the mayor said, referring to Mr. Dinkins’s motto — and the name of his biography — that symbolized the city’s mix of people of different races, faiths and sexual orientations.

Mr. Dinkins also had the most diverse administration up to that point. Two women became deputy mayors, and he appointed the city’s first Puerto Rican fire commissioner. For police commissioner, he chose Lee P. Brown, a Black veteran of the Atlanta and Houston forces.

He was a racial reconciliator

Mr. Dinkins was elected not long after Yusef Hawkins, a Black teenager, was chased and murdered by a white mob in the Bensonhurst neighborhood of Brooklyn, and a white jogger was beaten and raped in Central Park, leading to the conviction of five Black and Latino teenagers who were later exonerated.

It was a time of great racial strife in New York City and Mr. Dinkins issued a call for unity.

Stacy Lynch, the daughter of Mr. Dinkins’s chief political strategist, Bill Lynch, said her father often talked about how difficult it was to lead with that message of reconciliation.

“You had entire neighborhoods in the city that didn’t believe in his gorgeous mosaic,” said Ms. Lynch, now an aide to Mr. de Blasio. “The expectation that one person could resolve all of that was unrealistic. What he tried to do was create a space where people could work it out.”

But he also struggled to respond to racial violence in the Crown Heights neighborhood of Brooklyn, after a car in a rabbi’s motorcade killed a Black boy — an episode that came to define his mayoralty.

Patrick Gaspard, president of the Open Society Foundations, who served as a senior aide to Mr. Dinkins, recalled being a young man who was constantly enraged at the racial injustice that he encountered. But Mr. Dinkins, who was also outraged by racial injustice, had a different approach.

Mr. Gaspard, who referred to Mr. Dinkins as a “political Jackie Robinson,” recalled one St. Patrick’s Day parade where the crowd hurled beer cans at the mayor along with racial epithets. As he was rushed to his car, a beer can almost struck Mr. Dinkins. Mr. Gaspard saw a flash of anger on Mr. Dinkins’s face.

“I saw him breathe deeply, compose himself and wave to the crowd,” Mr. Gaspard said. “I know what he wanted to say and the response he wanted to give back but he was not going to debase himself or the office.”

The Rev. Al Sharpton said that he had urged Mr. Dinkins to be more strident and confrontational on issues of race, but was rebuffed.

“He was a racial reconciler without giving up what he believed,” Mr. Sharpton said. “He never stopped being a warrior, he just fought in ways that sometimes those who agreed with him didn’t understand.”

He laid the groundwork for a record drop in crime

His “Safe Streets, Safe City” plan increased the size of the police force to roughly 38,000 officers. Homicides hit an all-time high on his watch — there were 2,245 murders in 1990, including the subway killing of a tourist from Utah named Brian Watkins. They fell by 13 percent during his tenure to 1,946 in his last year in office and declined much more under Rudolph W. Giuliani, who succeeded him.

Michael R. Bloomberg, who served as mayor after him, said on Tuesday that he often reminded people that Mr. Dinkins’s successors “stood on his shoulders and built on his legacy.”

“He entered City Hall at a difficult time in New York’s history, and he helped set the city on a course for success — and a reduction in crime — that no one at the time imagined possible,” Mr. Bloomberg said.

He improved the National Tennis Center and Times Square

Mr. Dinkins, an avid tennis player, expanded the National Tennis Center in Flushing Meadows, Queens. Mr. Bloomberg later called it “the only good athletic sports stadium deal, not just in New York but in the country.”

Mr. Dinkins made other impressions on the city’s physical infrastructure.

He began the remarkable transformation of Times Square, even though Mr. Giuliani is often given credit. A key deal with the Walt Disney Company to rebuild the New Amsterdam Theater on 42nd Street was agreed upon on the last day of the Dinkins administration in December 1993.

Mr. Dinkins fought for years to pull together the parties that would spark the revitalization of the area because he knew what it would signal, Mr. Gaspard said.

“He knew that it would become a beacon that demonstrated to the world that New York City was open for business,” he said.

Mr. Dinkins was known for programs that helped the city’s poorest residents, including the after-school program known as Beacon centers, and putting health care clinics in medically underserved neighborhoods.

Beacon centers, which were created in 1991 as part of “Safe City, Safe Streets,” offer sports, tutoring and crafts in an effort to keep children out of trouble. The city now has 91 centers.

Mr. Dinkins also started an innovative plan to add health clinics in struggling neighborhoods to give poor children another option instead of expensive emergency room visits.

Eric Adams, the Brooklyn borough president and one of several candidates hoping to be the city’s second Black mayor, said Mr. Dinkins’s successes were not merely symbolic.

“Through his actions on behalf of lower-income people, he was both our effective advocate and confirmation of a long-held hope that our lives mattered to our government,” he said.

Jeffery C. Mays is a reporter on the Metro Desk who covers politics with a focus on New York City Hall. A native of Brooklyn, he is a graduate of Columbia University. @JeffCMays