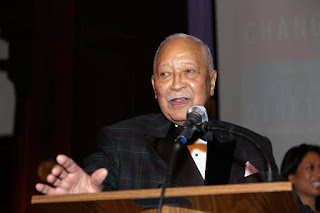 Tributes poured in Tuesday to mourn the death of David Dinkins, who made history when he was elected New York City’s first black mayor in 1989.

Mayor Bill de Blasio, who met first lady Chirlane McCray when they both worked as aides to then-Mayor Dinkins, said his death was a personal blow as well as a loss for the city.

“I’m just feeling pain this morning, I know so many people in this city are,” de Blasio said on the Hot 97 Ebro radio show Tuesday morning.

“I met Chirlane because we both worked for David Dinkins and I wouldn’t have this marriage, this woman I love, this family I love without him. So it couldn’t be more personal,” de Blasio said.

De Blasio honored his mentor by having the municipal building renamed after Dinkins.

“He just showed us what it meant to serve other people and do it with just tremendous humanity,” de Blasio said.

He said Dinkins “answered hate with love” and particularly cared deeply about children, citing the creation of the Beacon program that extended school hours so kids could benefit from after-school activities as one of his legacies.

Former Harlem Congressman Charles Rangel, a close pal of Dinkins, said the late mayor was a “compassionate public servant who loved his city and loved his country. Dave was well loved by those who knew him.”

Gov. Andrew Cuomo, who worked with Dinkins on homeless policy and knew him well because his tenure as mayor overlapped with the three-term governorship of his father, Mario Cuomo, said in a Twitter statement, “With the passing of Mayor Dinkins, NY lost a remarkable civic leader. The first and the only Black mayor of NYC, he cherished our ‘gorgeous mosaic’ & served the city & state over a career spanning decades with the hope of unity and a deep kindness.

“My friend, you will be missed,” the governor said.

But Dinkins was not just a politician. He was an avid tennis player and fan, who was instrumental in having the U.S. Open Tennis tournament hosted in Queens.

“David Dinkins was a true public servant, the 106th mayor of NYC, and its first Black mayor. He was a champion of the people, an incredible friend, and a supporter of tennis. Our condolences to his family. Rest In Peace, Mr. Mayor. You will be missed,” King said.

“David’s greatest legacy was keeping the US Open in New York City, something he dedicated himself to for two years and that resulted in a beautiful facility in Flushing Meadow Park that will stand as a testament to him for years to come. While I am glad David is finally reunited with his beloved Joyce, I will miss him and this city will miss him,” said Davidoff, referring to Dinkins’ wife, who died just weeks earlier.

At his inauguration as New York City’s first Black mayor, David Dinkins said: `We have not finished the journey toward liberty and justice, but surely we have come a long way.’ He was a trailblazer, a gentleman, and my friend. Bill and I send our condolences to all who loved him,” Hillary Clinton said in a tweet.

Said city Comptroller and 2021 mayoral candidate Scott Stringer, “New York City has lost a pillar and a patriot. With quiet dignity but lion-hearted love for his city, Mayor David Dinkins led us through one of the most challenging chapters in our history. To say he will be missed is an understatement: in a modern political discourse increasingly dominated by sharp words and loud bravado, Mayor Dinkins stood apart in his unwavering civility. Few stood taller.”

Brooklyn Borough President and fellow 2021 mayoral candidate Eric Adams said, “New York City has lost a great champion for people of color and a historic leader for a more inclusive city. … May we all follow in his large footsteps and add our bright stitch to the gorgeous mosaic of New York City that he so loved.”

State Senate Majority Leader Andrea Stewart-Cousins, the first black person and first female to lead the chamber, called Dinkins a “trailblazer and a historic leader” who served “as an example for millions that they too could succeed in public service and high elected office.”

“He gave a voice and a vision to so many young people of color, like me, and made things that seemed impossible, possible. He knew and was an example that although you may be the first, you must push open the doors for those who will come after you,” Heastie said.

“And when I became speaker of the New York State Assembly more than five years ago, I personally thanked Mayor Dinkins because his experiences no doubt would make my role as the first person of color to lead this chamber a little easier.”

Heastie also admired the folksy charm of Dinkins, who always addressed him with, “Hey, buddy, how’s my speaker doing?”

“Whenever I’d see him, we’d talk about 2 things we had in common: serving in the State Assembly & Tennis. He brought the @usta National Tennis Center to NYC,” Malliotakis tweeted.

Business and civic groups including the New York Partnership and the Association for a Better New York expressed gratitude for Dinkins’ public service and accomplishments.

“As the first African American mayor of New York City, he blazed a historic trail that has inspired generations of New Yorkers. Mayor Dinkins’ life and leadership bridged New York’s transition to the world’s premiere city,” the Partnership said.

“The Partnership worked closely with him on initiatives to address homelessness and affordable housing needs, to expand opportunities for minority-owned business, and to increase public safety and security. We joined his mission to South Africa to support Nelson Mandela as his party emerged from exile to rewrite the country’s constitution and bring an end to Apartheid. Our thoughts and prayers are with the Dinkins family,” the Partnership said.