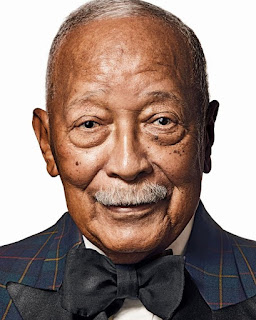 His mayoralty was not the overt failure that it once seemed.

The great question when it comes to David Dinkins, who died last night at 93, was and always will be: Should he get more credit? He was mayor of New York from 1989 to 1993, which meant he was handed a basically unplayable pack of cards on day one. The economy had crashed, taking the housing market with it. There was a glut of office space in midtown. Crack use was spiraling upward, chewing apart whatever social fabric had remained in poor neighborhoods after 20 years’ economic deprivation had already broken it down. People who are young now don’t remember this, but in that era, you were advised — seriously — not to take out your wallet in a subway station because someone might run by and steal it. (Keeping it in a back pocket was the mark of a rube.) The departing administration of Ed Koch had been good at some things — the real-estate industry liked him, the waterfront began to be reclaimed — and Koch himself had been a Big Funny Character, which goes a long way in a tabloid town. But he had also presided over corruption and had been openly disdainful toward the leadership of New York’s Black community when campaigning, saying that among its leaders “there is a lot of anti-Semitism.” There had been protests after the racist murders of Michael Griffith and Yusuf Hawkins, and the city’s race relations were perceived as a roiling mess. Dinkins, who would become New York’s first (and still only) Black mayor, was seen as the man who could perhaps calm it all down. When Koch ran for a fourth term, Dinkins beat him in the primary, then won the general election in a tight race against Rudy Giuliani. Fewer than 50,000 votes decided it.

Dinkins won on the idea of moving past the divisions and fractures of the Koch years, speaking often of the “gorgeous mosaic” of New York City, a term he correctly preferred to melting pot. (Nearly all of us would prefer to retain our cultural edges; when you melt everyone together, you get a khaki paste.) But there were always hints that he was not as widely accepted by white New Yorkers as it seemed: Dinkins received only 27 percent of their votes, a figure hard to imagine today. And he was much less of a public cheerleader than Koch had been. There was no way Dinkins would host Saturday Night Live, as Koch once did.

Immediately upon his election, Dinkins installed as his police commissioner Lee Brown, who had made big strides toward reform while running Houston’s police force. Neighborhood policing was his term in Texas, which became community policing here: many more foot patrols, by officers who understood and had connections to their neighborhoods. What they sought, at least, was some form of return to the image of the officer who knew his blocks, one whose local judgment was sound, one who could distinguish between a garden-variety local annoyance and an actual menace. (Bear in mind that this predates the armoring of the police department that took place after the 9/11 attacks; it did not involve the overt militarization that such a move might convey today. Nor did it require dealing with the long-term ill effects of the stop-and-frisk policies that came later.) He also expanded the cadet class, looking to train more cops from scratch; that took some political skill because the money came from Albany and a tax increase. He was pretty great on gay rights, too. The recession of the George H.W. Bush years didn’t help him either, but he still managed to keep the budget under control.

As a first, he was held to a nearly impossible set of standards by the media. Everything he did seemed to turn into a PR botch. His personal restraint and courtliness were perceived not as patrician but as weak. His private peevishness led to a hard-edged New York Times Magazine profile that opened with the one-sentence paragraph “He is not so nice.” (New York’s own cover story before his election proceeded from a place of skepticism. The headline read CAN DINKINS DO IT?) His wardrobe, custom-made to the extreme — a fastidiousness of dress that had, in his younger days, almost surely admitted him to places he otherwise couldn’t go — played as high-handed fussiness in the press. And most of all, his very incrementalism and cool cautiousness, the things that probably made him more acceptable to white voters in the first place, led to an image of inaction as one news event after another began to blow up around him. His inability to leap past the day-to-day hail of incoming fire and establish dramatic policy shifts turned into a narrative of ineffectuality.

The Family Red Apple situation certainly did him no good. In 1990, a dispute between a Korean greengrocer whose business carried that name and a Black customer in Flatbush had escalated to a boycott of first one grocery store, then several others around the city. It threw low-level racial animus into relief: Was the shop-owner a mercenary interloper in a mostly Black neighborhood? Was he a hardworking asset to an area that needed businesses? Were some grocers indeed guilty of racism toward their Black customers? Were there Black retaliations that condemned all Asian businesses? Was this mostly a stereotype-on-stereotype war, heated to boiling by the TV news and the tabloid press and a few mouthy pot-stirrers? (The answer to the last one is yes.) Dinkins knew he couldn’t be perceived as rolling over for Black activist concerns; he also couldn’t not support them. Instead, he worked mostly through intermediaries and didn’t make an appearance at the store until much too late. The perception was that he had been indifferent, verging on negligent.

And then the Crown Heights riots, in the summer of 1991, finished him off. Two Guyanese-immigrant Black children were hit by a car from the motorcade of the grand rebbe of Chabad-Lubavitch, Menachem Mendel Schneerson. A rumor that a Hatzolah ambulance crew had tended to the driver rather than the two children (one of whom, Gavin Cato, died) fired up the neighborhood’s Black community. That flame was stoked in marches and protests led by Al Sharpton, who has since expressed regret about his rhetoric, saying he was playing to the crowd. An Orthodox student named Yankel Rosenbaum was killed, probably in revenge, the next day. The streets exploded with protesters, mostly Black, a scattering of them shouting things like “Kill the Jews,” and turned violent. Dinkins tried to act in keeping with his campaign pledges — attempting to calm and to build bridges rather than to put down the dissent with hard police action — and for his troubles, he had rocks and bottles thrown at him. He had laudably urged caution and was rewarded with more unrest. (There were claims, which he always denied, that he had explicitly told the cops to hang back.) Eventually, the NYPD descended, arrested a lot of people, and ended the riots. Once again, the narrative was reinforced: Dinkins is not in control. Even the African American leaders who had put their faith in the mayor began to back off. The civil-rights lawyer and Sharpton associate Alton Maddox Jr. called him “Ed Koch in blackface.” A year later, as an election approached, the mayor’s approval rating overall fell into the 30s. Among white New Yorkers, it was at 21 percent.

By then, at least at the day-to-day level if not in crisis situations, community policing had begun to work. The violent-crime rate continued to drop. Between 1990 and 1993, it fell 8 percent, at first just a little but accelerating each year, and that change was at the time generally ascribed to policing reforms. Brown left as commissioner and Ray Kelly took over, and the murder rate kept going down. Yet Dinkins had (much as his mid-level aide Bill de Blasio would during his own mayoralty a generation later) lost the cops. At a 1992 police-union protest where the shouts turned terrifyingly racist — police officers chanted, “The mayor’s on crack!” and Jimmy Breslin reported that other cops shouted, “How do you like that? A n- - - - - mayor” — Giuliani stood on top of a car with a bullhorn, egging the police on. And Rudy’s message was easy for voters to grasp: I, a prosecutor, know how to get tough, and it is time for this liberal coddling to end. (If this rings familiar from the 2016 presidential election, in which a no-drama Black president was succeeded by an authoritarian who played to the racists in his base, well, you know who the most visible product of that era’s tabloid culture is.) When the election came around in November 1993, the vote totals more or less flipped from four years earlier, and Giuliani was the winner this time, again by about 50,000 votes.

Four years after that, when Giuliani ran for reelection, the murder rate had been cut in half and then some. Had Dinkins squeaked out a second term, would he have been able to lay claim to the victory over crime that had already begun? Giuliani and his partisans roll their eyes at the mere idea, and it is impossible to prove a hypothetical. But it has been studied to death (this review article provides a nice synopsis of most of the justifications), and the consensus answer is “probably, somewhat.” Most big cities saw a drop in crime through the 1990s in the United States and beyond. Regardless of who was mayor, the U.S. got richer during the Clinton years while New York City got much richer owing to the growth in financial services, and the cause-and-effect arguments between a richer city and a safer one go in both directions. No one will ever know. But there is a solid case that, in the court of recent historical opinion, Dinkins got a raw deal. He was usually relatively gracious about this kind of reassessment when asked in interviews, trying to be the bridge builder he had aspired to be as mayor. Only in his autobiography did he finally lay down an admission he had previously seemed to avoid: “I think it was just racism, pure and simple.”

Inarguably, though, he lost in one particular forum, at least in his era: that of the papers and the local TV news, which exerted so much more power three decades ago. The New York Times obit today, almost surely written and banked years ago, seemed to date from the era when Dinkins’s mayoralty was considered an inarguable failure. Other assessments in that same paper disagree — and in one published for his 90th birthday, three years ago, Dinkins himself wryly noted that his Times obit will probably mention Crown Heights in the first sentence. (It does indeed.) And it’s not outlandish to think that he would have done better in our era. There’s plenty of racial strife out there now, of course, and he would still have a bad time managing the cops, but the fierce ethnic-bloc politics he dealt with are much less rigid than they were then, and the city’s electorate is far more diverse. To a younger generation of New Yorkers, the city is now more than ever the gorgeous mosaic he championed.