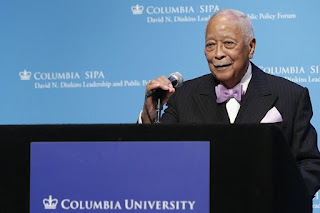 A few weeks after Mayor Dinkins lost his bid for reelection in late 1993, Dean John Ruggie of Columbia’s School of International Affairs and I shared breakfast with the mayor and (as he would say) “his bride” Joyce as part of Columbia’s effort to recruit Mayor Dinkins to our faculty. After we made our pitch, the mayor turned to Joyce and observed that soon he “would be unemployed and [they] would also be losing their public housing,” and he was inclined to accept our offer. David Dinkins’ warmth, humor and pragmatism were key elements of his charm and were a gift to those of us lucky to know him.

After he moved into his office on the 14th floor of Columbia’s International Affairs building, I worked with him to develop the two classes he would teach. Both were designed to take advantage of his unique experiences and singular ability. The first was a class where each week a very prominent guest speaker would lecture and engage in a discussion that the mayor would lead on critical issues in urban policy. When we were working on the syllabus, I asked him if there was anyone in New York City who would refuse an invitation to speak in his class. He thought there might be a few, but over the past quarter-century very few turned down an opportunity to speak in his class, and each year I looked forward to my guest spot at his lectern.

The second class we developed took advantage of his experience running America’s largest city. In that class, students were assigned to simulate the role of analysts in a city agency presenting a key issue analysis to the mayor for his decision. Students had to present data and arguments to a mayor whose generous and polite demeanor never prevented him from presenting a tough and analytic response to a proposal that needed more work.

For a quarter-century, Professor Dinkins and his guests presented students with a comprehensive and nuanced view of urban policymaking, in the special context of New York City. The Mayor had a deep and profound understanding of the city’s politics and political history. He was mayor during one of the most difficult periods in the city’s history and despite mistakes and setbacks, he achieved a great deal — much more than is acknowledged. The steep reduction in crime that Rudy Giuliani always gets credit for started under Mayor Dinkin’s watch as a result of his “safe streets, safe city” program. He understood that reducing crime required more than police, but programs for young people. He added thousands of officers to the NYPD but also kept libraries open six days a week and made sure schools stayed open after hours as well. He worked to get police out of their squad cars and back on the beat where they could engage with the public. He addressed issues of housing, homelessness and mental health. He understood New York and led the city with grace and dignity during a period of racial and economic stress.

Today, New York City is enduring a similar period of economic and racial turmoil with the minor addition of a pandemic tossed into the political soup. Just prior to the recent presidential election, I thought of Mayor Dinkins and of his sense of history and commitment to democracy under the awful pressure of his loss of the mayor’s office to Rudy Giuliani. While we continue to wait (probably in vain) for a concession message from President Trump, in late October I observed:

“If Trump should win, I am confident that Biden would not contest the election and perhaps might match the eloquence of my colleague professor and former Mayor David Dinkins when he lost his rematch with Rudy Giuliani in 1993. At that time, there was real concern that racial tensions might lead to violence, but Dinkins would have none of it. While painful, he knew his job on election evening was to be gracious in defeat. Dinkins quieted his angry and disappointed supporters and memorably stated that:

“The people have spoken, and I respect their decision… Mayors come and go but the life of a city must endure… We must all reach out… Never forget that this city is about dignity. It is about decency.” Listen to Dinkins demonstrating his commitment to democracy and to New York City and its people in his remarkable concession address. Such a grace note is unlikely in today’s hyper-partisan world, although America, like New York City in the 1990s, would benefit from an effort to reach across the ideological divide.”

While today we must endure a president who monetizes discord, David Dinkins reminds us of a different path. There are echoes of his temperament in President-elect Joe Biden, and I am hopeful that we have an opportunity to do what Mayor Dinkins did: seek understanding and common ground.

Mayor Dinkins’ career after leaving City Hall was a continuation of his career before it: dedicated to public service. Unlike many elected leaders, he did not try to cash in on his fame. He did not become a lobbyist or the rainmaker for a law firm or consulting business. I remember once working with his assistant to schedule an event and when I looked at his monthly calendar, I was simply amazed. It was filled with events at homeless shelters, soup kitchens, nursing homes, schools, along with cause-related fundraisers, and countless appearances designed to help people and lift their spirits.  When he first came to Columbia, my two daughters were very young and once he met them, he insisted that I give him their picture for the collection he carried around in the pocket of his suit jacket.

Of course, no remembrance of David Dinkins would be complete without some mention of tennis. His dedication to tennis was well known and until he could no longer play, it was a regular part of his routine. While serving as mayor, his support of the U.S. Tennis Association led to the construction of the National Tennis Center and Arthur Ashe Stadium in Queens, one of the very few government-subsidized athletic facilities that by any measure, has been a financial success. The U.S. Tennis Open is probably one of the most lucrative sporting events in the world, and for a number of years, Mayor Dinkins served on the Board of the U.S. Tennis Association. One of my fondest memories of the Mayor was when he brought me to the Open as his guest. Every celebrity in the stadium seemed to come over to shake his hand, and the sense of joy around him was a little overwhelming.

None of us are perfect and that includes my late colleague, but for anyone committed to public service, David Dinkins was a role model that few could match. He led a principled life and truly made the world a better place. Columbia President Lee Bollinger captured some of his essence in his statement last week:

“David was a steadfast leader for social justice, in detail and as a symbol. And, for me, he was a trusted and endlessly supportive advisor and friend. At this moment, I cannot help but remember how (as on so many occasions) he stood with me at a raucous public hearing before Community Board 9 voted on the Manhattanville campus. Then, as now, I felt stronger for his presence.”

I agree. David Dinkins made us stronger, but he also made us and our city better, and we should honor his memory in this difficult time by rededicating ourselves to public service. Let’s smile as we remember him and continue the struggle to make the world a better place.