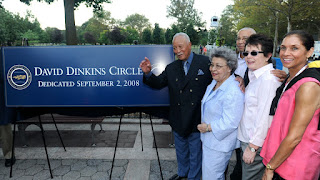 The USTA and US Open mourn the loss of David N. Dinkins, 106th mayor of the City of New York and longtime friend and champion of the sport of tennis, at the age of 93.

Having fallen in love with the sport as a young man, Dinkins was a key figure in it over the course of his public life in many ways, beginning with relocating the US Open from Forest Hills to a more accessible location in Queens.

Thanks in large part to his commitment and tireless efforts while mayor, the USTA was able to secure a 99-year lease for the USTA Billie Jean King National Tennis Center, ensuring that the US Open would long have a home in New York.

Before leaving office, he signed legislation allowing for the expansion of the NTC, paving the way for the strategic transformation that followed and resulting in the world-class facility that it is today.

In 2008, the area outside of the NTC’s East Gate, the welcome mat for those who annually come to New York from around the globe to experience Dinkins' favorite event, was renamed in his honor, from that point forward known as the “David Dinkins Circle.”

The ceremony was attended by dignitaries including Billie Jean King and Jeanne Ashe, widow of Arthur Ashe.

An avid player even into his 80s before health issues intervened, Dinkins was a near-constant presence at the Open even in his later years, joining in many other special events.

A member of the USTA Board of Directors for 12 years, Dinkins saw many of the game's greats inducted into the US Open Court of Champions, including Althea Gibson and Arthur Ashe's posthumous inductions in 2007 and 2009 (above), and Monica Seles' enshrinement in 2013.

Having been on hand for the dedication of Arthur Ashe Stadium in 1997, Dinkins also attended the ribbon-cutting ceremony for the new Louis Armstrong Stadium (below) in 2018.

Dinkins and his wife, Joyce, married in 1953, had two children and were frequent attendees at the US Open together. The former First Lady of New York City passed away in October at the age of 89.

“We will always remember our friend for his passion, integrity, and commitment to using our sport to better the lives of others,” said USTA Chairman of the Board and President Patrick Galbraith said.

“We are better—as an Association, as a sport, and as people—because of him. That will always be a part of his great legacy. We all will miss our friend, but we will move forward committed to preserving his legacy and continuing his good work.”