After clearing security at the gate, Press Aide Brittany Jones escorted the crew into the Yellow Room replete with a welcomed pitcher of a cold beverage, better known as the “champagne of waters” from NYC’s taps. The setting for the interview wasn’t quite right so the team joined several mayoral aides to scout a new location in the historic mansion.

Finally settling into an alternate parlor, the stage was set. While waiting for the Mayor and FLONYC, the crew engaged with mayoral aides in deducing who is taller – Mayor de Blasio or President Abraham Lincoln. A Google search determined that Mayor de Blasio at 6’7' is taller than President Lincoln who clocked in at 6’4".

At approximately 6:40pm, Mayor de Blasio entered (specific time noted since Director Hart had tickets to the Broadway performance of “The Book of Mormon” at 8:00pm.) The Mayor extended his extensive wingspan in a hug to Hart and humorously likened her work to that of Fellini, Bertolucci and other Italian male directors. “What, no Lina Wertmuller?” Hart asked. The Mayor replied, “And Kathryn Bigelow!” (Note that Director Hart would have mentioned a multitude of other important women directors in hindsight).

At 6:45pm, FLONYC joined the Mayor and both were seated side by side on a couch. During the 30-minute interview, the Mayor and First Lady fielded questions about how they met at City Hall during the Dinkins administration while giving huge props to Hart for their connecting and eventually marrying.

Backstory: Chirlane McCray, then a City Hall speechwriter asked Hart about de Blasio (the man who one day would be mayor then aide to First Deputy Mayor Bill Lynch) who had inquired about her availability to meet up outside the office. After affirming that de Blasio was not an “axe murderer” and “really smart, very funny and if you haven’t noticed a VERY tall person,” Hart encouraged McCray to go to lunch with de Blasio. And the rest is, as they say, history.

During the course of the interview, Mayor de Blasio and First Lady McCray provided powerful testament and affirmation to the accomplishments of the Dinkins administration. Most importantly, they gave thoughtful and impassioned reflections on race and how the City’s first African-American mayor’s leadership has been skewed by persistent and negative media coverage and how the legacy of the Dinkins administration has been refracted through the prism of race.

The interview ended at 7:15pm and the “Run DND” crew along with mayoral aides said in unison to Hart: “GO, GO, GO! We got this!” At precisely 7:59pm, Hart was seated at the Eugene O’Neill Theater for the 8:00pm performance of “The Book of Mormon.” 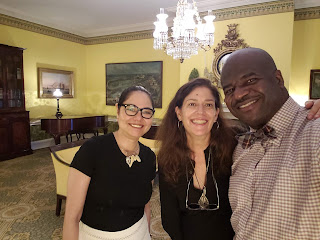