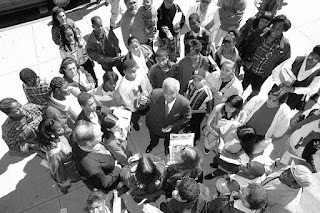 "Mr. Dinkins, would you please be my Mayor?
You’d be doing us a really big favor.”

-Phife Dawg, “Can I Kick It?” from A Tribe Called Quest’s debut album People’s Instinctive Travels and the Paths of Rhythm.

Today the world lost one of New York City’s true architects in former NYC Mayor David Dinkins. More than any other Mayor, Dinkins stepped into the helm of Gotham City at a time when NYC was at a moral crossroads.

Remember the movie, The Warriors?

It came out in 1979 and painted a picture of the divisions that existed in NYC by gang affiliation, racial makeup and borough differences.

Although it was based on Sol Yurick’s 1965 novel of the same name, the movie dropped during the turn of the city and the nation.

Ed Koch was the Mayor of NYC and Ronald Reagan was the President of the country.

Drug usage turned from heroin and cocaine to crack and the laws that would demonize poor communities and further divide the nation would deplete cities of its most valuable resource: people.

Koch’s administration had been in office for 11 years and during his third term scandal-hit regarding political associates.

Although the scandal never touched him personally, the racial tensions within the city turned the tide against him. The dynamics of Yusuf Hawkins’ murder and more led to a close race, however, Koch lost the 1989 Democratic primary to his successor, David Dinkins.

Dinkins inherited high crime rates, a cesspool in vices that plagued the crown jewel of New York City in Times Square, and he knew that his presence had to become a calming beacon of hope.

It’s because Dinkins was Barack Obama before #44 made it to the global stage.

As the first Black Mayor of New York City, Dinkins knew that the world would be watching him closely. He knew he was the Jackie Robinson of politics in a city polarized to the core.

He navigated those landmines and more to restore a sense of unity in NYC and advance the city towards its current state as a safer more reliable city for its residents and visitors.

The Howard University graduate walked into a crime rate in New York City that had risen alarmingly during the 1980s. Homicides hit an all-time high of 2,245 cases during 1990, Dinkins’ first year.

However, the rates of most crimes, including all categories of violent crime began to decline. During the remainder of his four-year term, a trend of falling rates continued and actually accelerated during his successor Rudy Giuliani’s term.

Although Giuliani’s response to 9-11 solidified him popularly as America’s Mayor, his legacy as a Mayor has a bedrock of the Dinkins administration. Current Mayor Bill DiBlasio worked for Dinkins as well and the NYC we all have come to adore was curated by the early stewardship of Dinkins.

A true guiding light, David Dinkins meant more to NYC than he might have truly known. He gave its Black residents hope and his class laid the foundation for the city’s return to national prominence.

Rest in power to David Dinkins, curator of the gorgeous mosaic that is NYC and Mayor to America before that was even a notion.