On an overcast afternoon in midtown Manhattan on Wednesday, May 29 at the corner of Lexington and 59th Street, the RunDND team conducted an interview with Ray Kelly, former New York City Police Commissioner under Mayors Dinkins and Bloomberg in the offices of Davia Temin, a crisis management maven who generously provided an elegant office for this key interview.

Kelly (read more background here) met with the doc team for an interview about his experiences serving as the acting head and eventually as the Commissioner of the New York City Police Department (NYPD) under Mayor David N. Dinkins.

Kelly is a legend among those who have served the City of New York. Like Mayor Dinkins, Commissioner Kelly is a proud Marine and his interview shed light on the high points, flash points and accomplishments of the Dinkins administration.

He affirmed the longevity and impact of anti-crime initiatives enacted under the Dinkins administration notably Safe Streets, Safe City saying that these measures continue to resonate in keeping crime low in NYC to present day. He discussed controversies including the police riot at City Hall in September, 1992 describing this as “a shameful moment and a dark stain.”

Kelly spoke candidly of the crises he experienced with Mayor Dinkins notably seeing firsthand the chaos in the streets of Crown Heights during the riots in August, 1991. Kelly was also the point person on communicating with Mayor Dinkins during the first attack on the World Trade Center in February 1993 while the Mayor was in Japan.

Kelly cited the many accomplishments of the Dinkins administration including the revival of Times Square, the USTA deal, and the Cops and Kids program adding that Mayor Dinkins is a “good, honorable and decent man.”

In the meantime, Kelly looks forward to joining Mayor Dinkins along with friends and colleagues to celebrate Mayor Dinkins 92nd birthday on July 10, 2019 at the offices of Manhattan Borough President Gale Brewer at a very appropriate venue:  the David N. Dinkins Municipal Building. 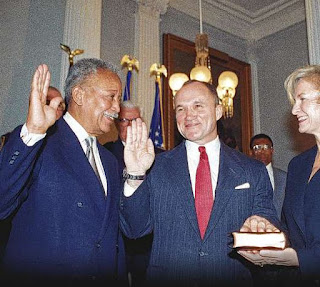 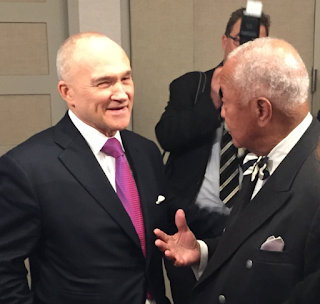