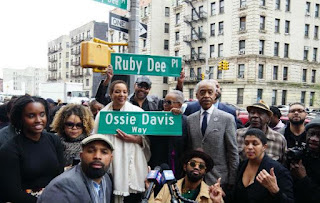 A ceremonial unveiling of the newly named ‘Ruby Dee Place’ and ‘Ossie Davis Way’ took place on Saturday, April 19th at the corner of 123rd Street and Saint Nicholas Avenue in Harlem, New York. The intersecting streets have been renamed to honor the countless contributions to civil rights advocacy and the arts that the late couple, Ossie Davis and Ruby Dee, so passionately demonstrated throughout their lives.

Both Dee and Davis each shared a special connection to Harlem. Dee was raised in Harlem after her parents moved there from Cleveland, Ohio when she was just an infant. Davis came of age in Harlem and is said to have spent numerous hours at The Schomburg Center for Research in Black Culture studying. Once married, the couple nurtured a special relationship with The Schomburg as they began their acting careers and also got involved to further issues of the Civil Rights Movement. The Dee-Davis archives can are located at The Schomburg.

The Dee-Davis children, Nora Day, Hasna Muhammad, and Guy Davis attended the street name unveiling ceremony and remarked about the spirit of their parents still remaining in Harlem even amidst all the changes that may appear on the surface.

"Coming here sometimes, you might not recognize the Harlem that mom and dad grew up in,” said Muhammad. “What we need to do is have links to the past that will remind us about who the people were that build this neighborhood. Having their names on street signs will be visual representation of that.”

The event was hosted by the Dwyer Cultural Center, which is a 7,000 square foot educational facility dedicated to promoting and preserving Harlem’s art and community culture. The Center’s founder, Cliff Frazier, shared a close relationship with the couple and considered them to be “dear friends.” As such, the intersection that was chosen due in part to its close proximity to the Center.

While Davis passed away in 2005 at the age of 87 and Dee in 2014 at the age of 91, their legacy of excellence, selflessness, and community building lives on.