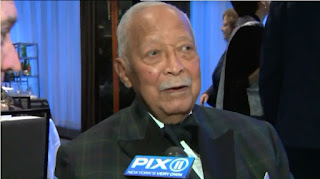 Mayor Bill de Blasio, who was at the show and also took the stage, was played by PIX11's James Ford.

"Its like open season, they can do whatever want," de Blasio said. "It's cool it's cool. You know what it's a great tradition .. everyone makes fun each other and fun of themselves more importantly, and you know what for one night everyone gets together for a good cause and everyone really does love New York City."

Since the Inner Circle began in 1922, every NYC mayor has participated in the dinner and performance.

"I love to see my friends who can't sing or dance so well but they are game and they hang right in there," former NYC Mayor David Dinkins said.

Every politician is fair game.

"I'm honored to be played by such a noteworthy journalist," Trottenberg said.

The purpose of the night is to have fun, but more importantly to raise money for a number of charities, including one to support local journalists.

"It's all in good fun, it's a roast its a ribbing," 1010 WINS reporter and Inner Circle President Sonia Rincon said.

PIX11 anchor Dan Mannarino said "to work alongside Kirstin Cole in a show like this is one of the best and highlights of my career, no sarcasm at all."

"The camaraderie of the reporters working for two and three months singing and dancing .. we don't have to have a lot of talent, we just have a love for performing and we raise money for charities," PIX 11 reporter Magee Hickey added.