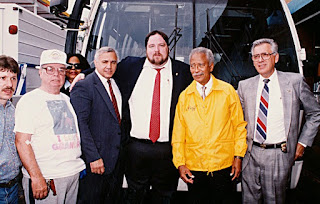 Lawrence J. “Larry” Hanley, International President of the Amalgamated Transit Union and founding member of the Working Families Party in New York State -- a former Bulls Head resident -- died May 7 in Odenton, Md. , where he lived since 2010. He was 62.

A tireless leader who fought for more than 200,000 ATU members, transit riders and all trade unions, under his leadership the organization was transformed into one of the strongest unions in the labor movement.

During Hanley’s reign he fearlessly advocated for better public transportation and for social, racial, and economic justice for all working classes. He devoted more than 40 years of his life to the ATU and was a tireless leader representing its members, transit riders, and all trade unions.

In 1978 at age 21, Hanley began driving a bus out of Brooklyn’s Flatbush Depot and relocated to Staten Island in 1979 when he became a member of ATU Local 726. Back then, even as a rookie, he was conscious of defending those who couldn’t defend themselves and sought to actively protect bus drivers and passengers on all levels.

He soon rose to the rank of shop steward, helped lead a takeover of the borough’s Democratic party, was elected the youngest president of Local 726 and organized union members and transit riders in a successful effort to reform the way transit service was provided on Staten Island.

He was elected secretary/treasurer of ATU in 1987, the second highest ranking position in the local.

He ran the Staten Island operation of David Dinkins’ successful campaign for mayor of New York and was also the Staten Island chairman for Liz Holtzman, a former member of the United States House of Representatives, who represented New York's 16th congressional district for four terms.

As international president, he restructured the ATU to better protect the livelihoods of transit workers across 44 U.S. states, the District of Columbia, and nine Canadian provinces.

Stewart Ransom, a retired bus operator, and a photographer and videographer for the ATU Local 726, and friend, noted:

“Larry Hanley was one of the greatest labor leaders of the last 100 years on the level of Mike Quill, the labor leader during the 1966 bus driver strikes. He started the Working Families Party in New York State, which continues to this day. He worked as international president and one of this issues were bus operators being assaulted. And he diligently addressed that.”