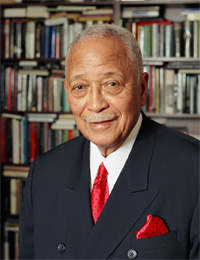 For many New Yorkers, David N. Dinkins is still their Mayor if not “de facto”, then in spirit, dedication, and style.

In 1989, nearly thirty years ago, David N. Dinkins conquered New York City. He defeated the three-term incumbent Ed Koch and then went on to defeat the widely regarded US Attorney General, Rudy Giuliani, to become the first and only African-American Mayor of the City of New York.

History was made – a more gracious and yet effective Mayor you cannot find. Now the Mayor is celebrating his 92nd birthday, just as gracious, as sensitive to the needs of the city, proud of his own mark on the city, and proud he should
be, giving New York an appropriate description of a “Gorgeous Mosaic” referring to the ethnic diversity of the City.

It was Mayor David Dinkins who fought for and instituted the Safe Street, Safe City program whose success continues today. He fought Albany to get some 5,000 more cops on the street and hire New York’s most successful Police Commissioner Ray Kelly. He guided the city through one of its tough economic times right after the recession, and in spite of these tough times, Mayor Dinkins was able to bring the homeless population to its lowest point in two decades.

The lasting vision of Times Square and the cultural center it is today- Mayor Dinkins’ vision brought this prime area from a sex infested operation by providing incentives to developers to give it the international appeal it is today. The vision of the Mayor created the Arthur Ashe Stadium, the home of the US Open, and made it one of the most successful sports ventures in the country. Mayor Dinkins invested himself internationally for great causes and the building of cooperation and collaboration.

He was a true friend of Israel and made several visits for several initiatives for the country. He was keenly invested in the Freedom of South Africa; Mandela’s first overseas trip after his release from prison was to New York City, and Mayor Dinkins hosted the historic visit. We had the pleasure of hosting the Mayor in various Caribbean countries at the Caribbean Multi-National Business Conferences. He never failed to be constructive and encouraging, but he also had the grace and tact to silence unneeded commentary – the people of the Caribbean loved him and he loved them.

The Crown Heights Affair of which much is written is so misunderstood. It so happens that CARIB NEWS was central to the story because the first victim was of Caribbean descent. The Mayor’s office was on spot, helped the victim’s parents and made necessary arrangements. Meetings were held between the parties at City Hall, Gracie Mansion and in Brooklyn. CARIB NEWS was party to the discussions, not as a news organization but by community representation. All efforts were made by Bill Lynch representing the Mayor with the various factions. Some of these grievances were decades-old on each side. Some of the motives were opportunity for power gain. There could not have been a more sensitive position than that of the Mayor. The parties were just not ready to come to terms.

The Mayor did engineer a great peace gesture at the Labor Day Caribbean Carnival event when he had leaders from both communities moving up Eastern Parkway to the cheers of the crowd. It is a picture etched in my mind, but rarely shown in the media. We are so proud of you, what you have done, and what you meant to the community, country and the world. May you live to see many more; your graciousness in politics needs to be practiced– the world would be a better place.

In celebration of your 92nd, Still Going Strong!