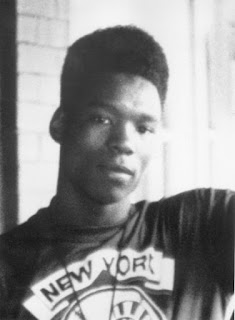 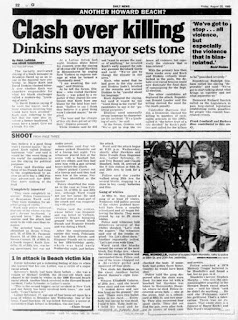 Bigotry in Bensonhurst and the murder of Yusuf Hawkins

It’s been 30 years since four teenage friends from East New York, Brooklyn, made their cursed excursion to Bensonhurst to see about buying a used car.

Yusuf Hawkins and his pals emerged from the N line subway on 20th Ave. and found themselves surrounded by a halfwit mob of young men hepped up on testosterone, machismo and misinformation.

The confrontation ended in the gunshot murder of Hawkins, 16.
...
The murder occurred three weeks before a Democratic primary election for mayor, which pitted Ed Koch, running for his fourth term, against David Dinkins, seeking to become the city’s first black mayor.

The Bensonhurst shooting helped mold the campaign as a referendum on race in New York.

When Dinkins called the murder a "lynching" and rushed to comfort Hawkins’ parents, Koch accused his opponent of “vile” politicking.

The city’s racial fissure was graphically demonstrated during a series of protest marches through Bensonhurst led by Al Sharpton — like Koch, an oversized and divisive personality.

Some people lining the streets hurled bigoted invectives at the marchers.
...
“Yusuf Hawkins died of racism in the first degree,” the newly elected Mayor Dinkins declared after the verdict. “That is a crime far more common than most of us are willing to admit.”