The storied conference room on the 19th floor in what was then the Municipal Building was the party venue. This prompted recollections from those who had served under then Manhattan Borough President Dinkins when he was frequently vexed by red wine stains on the carpet courtesy of the hard-partying staff and “depressions in the conference room table.”  In hindsight, MBP Dinkins veterans ascribed this meticulousness to Dinkins being a Marine.

Champagne, Prosecco, beer and soft drinks were poured and guests enjoyed an Italian themed dinner from Carmine’s courtesy of the office of Borough President Brewer. Guest queued up to wish Mayor Dinkins a happy birthday and take photos as he held court seated in a formidable high back wooden chair from the old Board of Estimate chambers at City Hall.

The program commenced at 7pm with MBP Brewer singing the praises of DND on the occasion of his 92nd year; she was followed by David N. Dinkins, Jr. (aka the lil’ fellow by his dad) whose remarks focused on the lessons he had learned from his father:  friendship and loyalty.

David Archambault II, the former tribal chairman of the Standing Rock Indian Reservation traveled from North Dakota to give tribute to Mayor Dinkins whom he met during the Dakota Access Pipeline protest movement.  He presented Mayor Dinkins with a tribal necklace made especially for him depicting a man on a horse and signifying strength.

Celebrants raised a toast as a splendid tennis court cake with the David N. Dinkins Municipal Building rising on the side was cut by the Mayor, assisted by Lynda Hamilton, Program Manager at SIPA/Columbia University who also led the planning of the event.

The cake, along with 92 pies (donated to families of the Association to Benefit Children of which Dinkins is a board member) were provided by Ellen’s Stardust Diner, a storied restaurant frequented by Mayors and City Hall staff when it was located near municipal offices in lower Manhattan.

Guests were given a unique parting gift donated by Tim Zagat to remember the occasion – a stylish black baseball cap with Dinkins at 92 stitched on the front.  Mayor Dinkins placed a cap on his head as he departed and everyone who attended agreed that he was delighted by the celebration as were all in attendance. 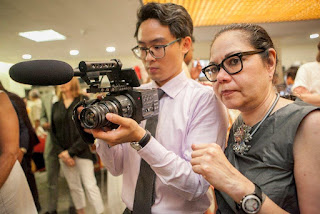