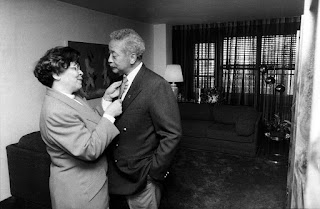 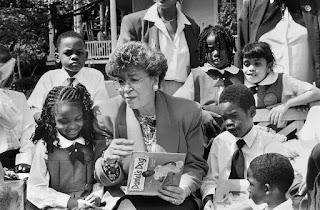 As the city’s first Black first lady, she transformed herself from a private person to a gracious public advocate for children.

By Sam Roberts, NY Times
Joyce B. Dinkins, who as the wife of David N. Dinkins fulfilled her role as first lady of New York City with grace and dignity as she promoted programs that encouraged literacy and education and guarded against child abuse, died on Sunday at her home in Manhattan. She was 89.
Her death was confirmed by her family.
David Dinkins was the city’s first Black mayor, and during his one term, from 1990 to 1994, Mrs. Dinkins became a role model for millions of African-Americans, gracefully taking advantage of the visibility that came with her husband’s office to promote her favorite causes. She visited soup kitchens, libraries and schools and was the honorary chairwoman of the Mayor’s Task Force on Child Abuse and of “The First Day Back to School,” a multimedia public service campaign. In 1990, she established a public school program called “Reading Is Recreation.”
A children’s book collection was named in her honor at the New York Public Library’s Schomburg Center for Research in Black Culture, and she was a board member of the New York Urban League and WNET.
She was also the first mayor’s wife to oversee Gracie Mansion, the official residence, since Edward I. Koch, a bachelor, took office in 1978.
“Basically up until this point in my life I have been a private person,” she told The New York Times in 1989. “However, I understand that that will no longer be possible. So I will adjust in time because I like people.”
Joyce Elizabeth Burrows was born on Dec. 22, 1930, in Manhattan, one of two daughters of Elaine (Nelthrop) Burrows, a businesswoman, and Daniel Burrows, a real estate broker and liquor store owner who was among the first Black people to be elected a Democratic district leader in Manhattan and, in 1939, a New York State assemblyman.
When she was in elementary school, the family moved to Yonkers, N.Y., but they faced racial hostility and returned to Harlem about a year later. After graduating from George Washington High School in Manhattan, she earned a bachelor’s degree in sociology in 1953 at Howard University, a historically Black college, where she met Mr. Dinkins. They married later that year.
She had planned to become a social worker, but postponed her career plans until after her two children reached school age and then took accounting jobs instead.
Mr. Dinkins was mentored by his wife’s father, from whom she inherited a dependable resolve though not his flamboyance (once, to dramatize his case for banning weapons wielded by warring gangsters, he brandished a four-inch switchblade before the State Assembly; the ban passed, 140 to 0).
David Dinkins rose through the ranks of Harlem politics. He won an Assembly seat, was appointed city clerk, served as Manhattan borough president and was elected mayor just as Mrs. Dinkins was retiring as coordinator of metropolitan affairs for the state Department of Taxation and Finance.
Former Representative Charles B. Rangel, a friend of the Dinkins family for decades, said of her in 1990, “She is not a politician but a partner, and a partner has a different role.”
In an interview with The Times, she explained her relationship with the mayor this way: “I can’t say that he asks for my advice; nor am I an adviser. I consider myself more a supporter than I do an adviser. I give my opinions. I can’t say he always accepts them.”
In addition to Mr. Dinkins, she is survived by their two children, David N. Dinkins Jr. and Donna Dinkins Hoggard, and two grandchildren.
A few months after Mr. Dinkins was elected, a group of delighted schoolchildren visiting City Hall grinned proudly when they encountered the mayor. One little girl who was clinging to Mr. Dinkins turned to his wife and, in a voice loud enough to prompt laughter at his crowded news conference, asked, “And who are you?”
Mrs. Dinkins replied, proudly and unapologetically, “I’m the mayor’s wife.”