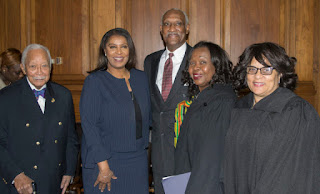 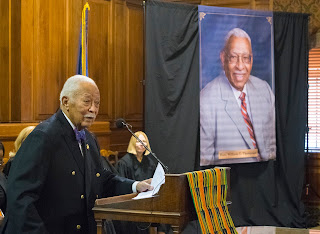 The Appellate Division, Second Judicial Department, held a Black History Month ceremony on Wednesday that also served as another memorial for the late Justice William C. Thompson, a pioneer politician and judge who fought in the segregated “Buffalo Soldiers” unit during WWII.

Thompson earned a Purple Heart for his time in the Buffalo Soldiers unit. After he returned home, he became a local politician — first as Brooklyn’s first black state senator and then as a member of City Council.

Thompson eventually gave up politics to become a judge. He was the first black administrative judge in the Brooklyn Supreme Court and then the first black judge to sit on the Appellate Division, Second Judicial Department.

Justice Sylvia Hinds-Radix, a friend of the late judge who helped to organize the event along with Justice Sylvia Ash and members of the Appellate Division, said that she had planned to honor Justice Thompson for BHM prior to his death and that he was really looking forward to it.

“He was very happy to have this program at the Appellate Division,” Hon. Judge Hinds-Radix said. “He told me that he was going to come today even if he needed an ambulance to get here.”

Unfortunately, Justice Thompson died on Christmas Eve, so a long list of his friends, family members and former colleagues showed up to honor him instead.

Former Mayor David Dinkins, the first and only black mayor in the history of New York City, and Attorney General Letitia James, the first black woman elected to a statewide position, were two of the attendees, along with the judge’s son, former mayoral candidate William Thompson Jr. and his sister Gail Thompson-Lake.