US Open: There's More to the US Open than Opulence and Grandiosity 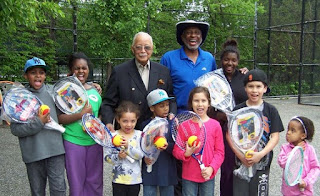 There’s more to the US Open than opulence and grandiosity

The summer might be coming to an end, but not without another spectacular two weeks of great, world-class U.S. Open tennis here in New York City, featuring the world’s best-ranked players.

Defending champions Rafael Nadal and Sloane Stephens joined by challengers Venus and Serena Williams, Novak Djokovic, Roger Federer, Maria Sharapova, the biggest names in the sport and others who you might or might not be familiar with, have returned to the Billie Jean King Tennis Center in Flushing Queens to compete for the USTA’s prestigious silver cup and the several million dollars of prize money for the winners. This year is their 50th year.

Fans and celebrities were treated on Day 1, Monday, by the United States Tennis Association to matches featuring Venus Williams, Stephens and a variety of others during the day, and matches featuring Serena Williams and Nadal at night.

Kelly Clarkson performed. Maxwell sang the national anthem to open the evening’s matches between Serena Williams and Magda Linette of Poland, followed by Nadal versus David Ferrer. Mike Tyson, Anna Wintour, Hugh Jackman, Gayle King, Vara Wang, Daymond John, Gladys Knight and Katie Couric were in the capacity crowd of 23,000-plus seated at the USTA’s Arthur Ashe Stadium—67,832 fans were on the King Center grounds during the day.

But with all of the grandiosity of the U.S. Open, its pricy ticket, pricy concessions, $128 windbreakers $10 milkshakes and $17 Honey Dew Mellon Ball drinks (with vodka), their largesse, their spirit of giving back should not go unnoticed.

The David Dinkins Tennis Club from Harlem headed by Sam Penceal is a beneficiary. So is the One Love Lenny Simpson Tennis and Education Fund from Wilmington, N.C.

Six student-athletes and parents from Penceal’s program joined USTA President and CEO Katrina Adams in the President’s Suite at Ashe Stadium for a day of tennis events. Simpson, along with 15 parents, transported 22 young student-athletes to Flushing to also see some great tennis, and to participate in one of the day’s opening ceremonies.

“I love the game of tennis, but I also love school,” said Nobel, who admires Serena Williams and Keys. She feels a connection with them, although she realizes that she might not become a professional tennis player.

“Tennis is a great game, but I’m probably not going to be a professional,” noted the academic princess. “So my ticket in life is going to be my education. If I put my passion in this, and I put my work ethic in this, and that goes back to tennis, because it has given me some of these skills, or at least improved upon them as a student. It’s allowed me to be a better scholar.”

“They [the kids] have to be inspired after this week,” said Mark Sinclair, One Love’s executive secretary about their participation in this year’s Open. “This trip has been phenomenal.”

“The kids were down on the court on one of the main venues of the U.S. Open to give an on-court demonstration with hitting and rallying before the main match,” said Simpson, the program’s founder and executive director. “ESPN covered it. It was a wonderful display of kids having fun, accomplishing something.”

Simpson grew up living next door to tennis great Althea Gibson. She sparked his interest in the sport. One of the goals of his program, besides its dedication to its participants, is to improve the recognition that Gibson deserves posthumously.

“I’m so proud of these kids,” he said. “It was a wonderful opportunity.”