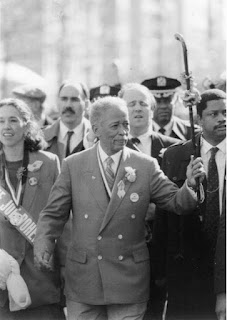 Excerpt from the column -- view the full article here.

I often think that, like celebrities maintaining the psychological age they become famous at, clusters of diaspora hold on to the characteristics of the country they left in the decade they departed. This is certainly one explanation for the conservatism that typifies Irish-America, looking back across the Atlantic at a society that has passed them out, still clinging to the fiction of the past being present. It’s impossible to truly know a place unless you’re in it. You can’t feel change from afar.

At home, Irish people see Irish-Americans as wide-eyed and plastic. Irish identity and Irish-American identity and culture are two very different things, the latter feels regressive. While Catholic fundamentalism is still embedded in many areas of Irish life, and Catholic groups still maintain undue influence, there is an attempt in Ireland to be discrete about it.

But fraternal Catholicism has long been the visible engine of Irish-America, and has, in some ways, held the community back. The Ancient Order of Hibernians (AHO) met with years of criticism for their exclusion of Irish-American gay and lesbian groups in the St Patrick’s Day parade in Manhattan.

In 1990 the newly formed Irish Gay and Lesbian Organisation (ILGO) requested to march in the 1991 parade, a request denied by the AHO. Mayor David Dinkins, New York’s first and to date only African-American mayor, negotiated with the AHO, and the ILGO marched with the midtown Manhattan AOH chapter, with Dinkins himself marching in tow.

They were not allowed carry their own banner, and were met with homophobic placards and disgusting slurs from the crowd. Watch the footage online, it’s absolutely vile. At one point you can see and hear an elderly woman screaming “Aids” from the sideline. “You’re all a bunch of faggots . . . Go home to your wife and kids, you bastards,” one man shouts.

Dinkins compared the abuse received and the tense atmosphere to the 1960s civil rights marches in Alabama. “It was like marching in Birmingham,” Dinkins told reporters afterwards, “I knew there would be deep emotions, but I did not anticipate the cowards in the crowd. There was far, far too much negative comment.”

The ILGO was banned from marching in 1992. Dinkins boycotted, and the LGBT community kept protesting. Back in Ireland, gay and lesbian people organised and flew to New York to protest when St Patrick’s Day came around again. In 1992, a group of lesbians (including my partner, Sarah Francis), applied to march in the Cork parade, organised by the Cork Chamber of Commerce. They were granted permission, and 32 lesbians marched behind a banner that said “Hello New York”.

It’s an indication, perhaps, of how progressive queer politics in Ireland was more prominent in Cork than elsewhere in the country at the time. In 1993, three months before sexual acts between men were decriminalised, lesbians and gay men marched in parades in Galway and Dublin. From then on, the St Patrick’s Day Parade in Dublin positioned itself as an inclusive, multicultural festival, a message it continues to express. 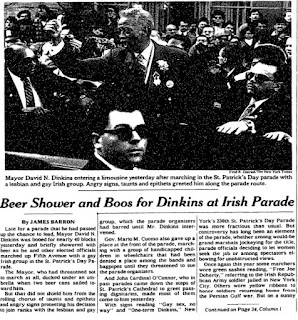