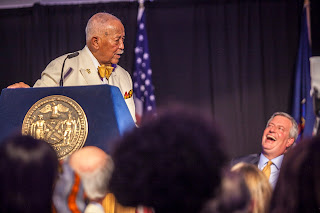 It's been a busy couple of weeks for the RunDND production team. Filmmaker Laura Hart conducted an interview with Mayor Dinkins and Mrs. Dinkins on January 6 at their home. The interview covered many topics with the Mayor relaxed and forthcoming.

Laura reviewed the terrific footage taken at the Municipal Building renaming and the pre-Inauguration reception for Mayor Bill de Blasio at Gracie Mansion. She also is working on a new trailer that will cover both accomplishments and controversies associated with David Dinkins' time as the 106th Mayor of New York City.